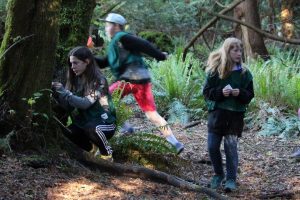 Have you ever seen an opossum? Well now I have.
We (My class) had an exiting adventure at Tribune Bay Outdoor Education Center and like I said I saw an opossum! I had never seen one before and honestly they are pretty creepy. I also made some mistakes at camp which lead to some life lessons. These are some of the lessons I learned at camp.
Make the best of all situations
I learned to make the best of all situations because of a few things, for example I personally don’t enjoy rock climbing on rock walls (But I like climbing on things that are not climbing walls) and that was one of the activities we did there. I did it and I had fun even though it wasn’t my favorite. Another example was one night at dinner some of my friends were sitting at a table that was full so me and one of my other friends had to sit at a table all by ourselves. I know that it is hard but you really should try to have fun as much as possible and even if you are in your cabin and there are a lot of spiders above your bed. (that’s me)
Even though we only spent a few days there I am sure that I will remember this for a life time, but I will also probably remember the mistakes I made like not…
Being prepared
I wasn’t as prepared as I should have been, for example I got pretty sun burnt! Remember sunscreen I did bring it, but one day I forgot to put it on. Although I got sunburn I also froze one day. I only brought some T-shirts a sweater and a thin rain coat and now I know now that next year I need to pack more layers of cloths. Again this is about packing so once you are there its not like you can really fix it unless you borrow a friends stuff like I did sometimes. I also under estimate the weather quite often even when I’m at home, I did it again. I didn’t think that I would need sunglasses but I did. Luckily the instructors got you covered, they will give you blankets if you need them but our cabin was heated. And because of that I really learned to…
Trust the instructors
They are there to make sure that you are safe so don’t expect them to do something like drop you while you are in your harness. I thought that the 30 ft. pole in leap of faith was about to break when I was up there but I convinced myself that I was safe and that when I jumped the instructor would catch me. The instructors/leaders work very hard to keep you safe and when playing games they will try to catch the cheaters and make them sit out but there will always be cheaters in games. It’s important to trust the instructors but also to trust each other. You should trust your friends, not just your closest friends but also your class mates. We played many games and I hoped it would be a fair game and I could trust people not to cheat and of course a few people cheated, that’s expected, but not too many.
Those are some of the life lessons I learned from this amazing journey at camp. I hope next year I will be able to go again and if I do I will remember these helpful and meaningful lessons, hopefully 🙂
~Jayden